Database management systems are are systems used for accessing and manipulating information. The data can be manipulated using a set of keywords following of syntax rules. To perform operations on the database, it is required to learn the structured query language(SQL). Hence, a user who do not know SQL cannot directly access information from the database.

Natural Language Interface for Database(NLIDB). What is it?

It is a proposed solution to the problem of accessing information in a database using natural language like English, having no technical knowledge about language like database languages like SQL. It is a tool which can understand a user's query in natural language, convert it into appropriate SQL query, so that the user can get the required information from the database.

Symbolic or Rule based approach.

This is the approach in which the translation from natural language to SQL is done using human-crafted and curated set of rules. If you do not have good or enough training data, then statistical techniques cannot be applied and one has to go for rule based approach.
An example of a rule based system can look like:
Pattern:  ... "capital"... <country>
Action: Report CAPITAL of row where COUNTRY=<country>
Meaning: If a user's request contains the word "capital" followed by a country name, then system should return the capital of the country <country>.

The rule based system has many disadvantages as compared to other systems as it required time, money and domain experts to make the set of rules and embed them in the system.

Statistical or corpus based approach.

This is a machine learning paradigm using statistical inference for automatically learning such rules, stated in above approach, through the analysis of large corpus or structured set of text related to natural language to SQL translation of real world examples. There are algorithms that extract "features" from input and use them to find relations and generalize using the given corpus. This analysis does not require much time or a domain expert but data and large amount of research into supervised machine learning you apply, in comparison to the rule based approach.
There are various statistical techniques such as N-gram, Hidden Markov Model, Context free grammar(probabilistic), Decision Tree, etc. are employed as major Natural Language Processing methods.

Neural Networks are computational model which is based on a large collection of simple neural units (artificial neurons), loosely analogous to the observed behavior of a biological brain.
A special class of Neural Network called Recurrent Network is widely being used in Natural Language tasks. The presence of feedback loop in recurrent networks makes them more suitable for temporal data tasks such as natural language understanding. This approach is based on distributed representations corresponding to statistical regularities in language.
Neural Networks, once trained using standard back propagation algorithm, the translator is able to recognize all valid queries presented and convert it into appropriate SQL command.
The main advantage of this technique is that the system can be built for any natural language, having appropriate dataset for the same. The recognition and translation time for any query is also decreased using such a system due to inherent parallelism exhibited by Neural Networks.

Overview: Original paper: The Google File System Authors: Sanjay Ghemawat, Howard Gobioff, and Shun-Tak Leung A distributed file system(DFS) is a file system that allows you to access files stored in multiple hosts distributed across them. In contrast to other data stores like MySQL or NoSQL which can also be made distributed, the data is DFS is stored in raw form and as files instead of a table or a fixed-document format. The use cases where DFS is used are very vast. From storing media content like Youtube videos to Instagram images to blogs like these, anything that can be stored as a file, is big and is not suitable to store in other data stores, DFS is generally a preferred choice for everyone. Key points to consider while designing a DFS: Understanding from the perspective of using a distributed file system, there are some characteristics that need to be considered while choosing the data store and tweaked according to the business requirements of the project. Consistency - Str
Read more 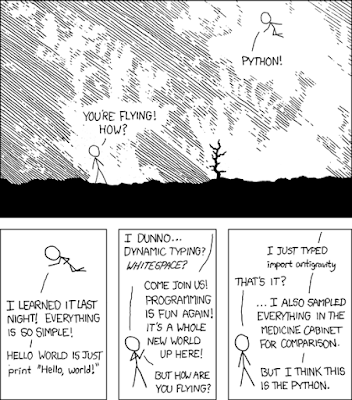 Python provides several keywords which enable a functional programming approach for python. These functions are all convenience features in that they can be written in Python fairly easily  and can be replaced by custom code with some more line of code. As most of the beginners to python are confused or do not efficiently use these features, I will here try to explain those features in a simple manner. LAMBDA : Lambda function also called anonymous function or unbounded function can be used as any normal function in python but without any name.Starting with the keyword lambda followed by parameters before the colon and return value after it. Syntax - lambda arguments : expression Ex: Getting any number modulo 3 ( of-course this can be done using simple %3 ) is equivalent to The above python expression can be stated as "declare a nameless function taking a parameter named x. Perform the operation x%3. The return value of this nameless function will by the result of
Read more